December 06, 2010
I posted this a few weeks ago on my Facebook page, but I thought I would reproduce it here.  I might copy a few others over as I go along, and so I'm sorry for the repeat to my FB friends.

I recently discovered the joys of candy-making when I had an excess of vegan caramel (and pecans and chocolate) leftover from making candy apples with friends (hence - turtles!).  So I thought I would try making some of my other favorite candies at home.  It is surprisingly difficult to find vegan peanut butter cups, but not so hard to make!  They may not be pretty, but they're yummy!

For the filling:
For the chocolate coating:

Mix the ingredients for the filling together with an electric mixer on low until it resembles cookie dough.

Melt the chocolate, either in a double boiler or in the microwave (heat in
30 sec increments, stirring between each, until melted).

Using pastry brush, line the cups with chocolate.  Let set in freezer for about 10 minutes.

Form the filling into balls and drop into cups, being careful not to break the chocolate by pushing too hard.

Pour chocolate over each cup and use spreader to even off top. Leave in freezer for about 20 minutes to set.
Enjoy!

Note: What is pictured here is about a quarter of the recipe.  Adapted from http://www.chow.com/recipes/11056-peanut-butta-cups, where you can find a much more professional-sounding process.
candy chocolate peanut butter vegan 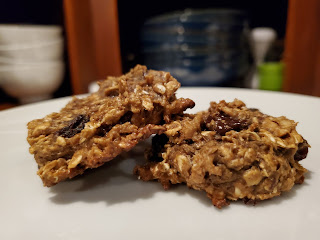